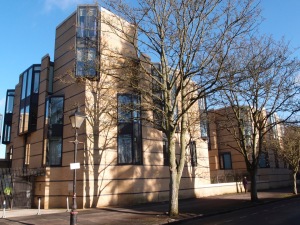 The two blocks comprising the second phase of this scheme were completed in 2004, adding a further 47 study bedrooms to the three earlier blocks. Although complex in form, this scheme is somewhat simpler, and plainer, than MacCormac’s previous college schemes of the 1990s, at Wadham (Bowra Building, 1992) and St John’s (Garden Quad, 1994), which have boldly exposed frames, and a little closer in style to their first Oxford project at Worcester (Sainsbury Building, 1984). Buff-coloured brick, faceted forms, acute angles and projecting bay windows enrich the language, which is consciously attempting to marry the traditional and the modern. MacCormac’s (and MJP Architects) were one of the most successful firms to tackle this very contemporary challenge, but there was even better work to come from their office (see St John’s – Kendrew Quad).

Find an architect from the Word Cloud below